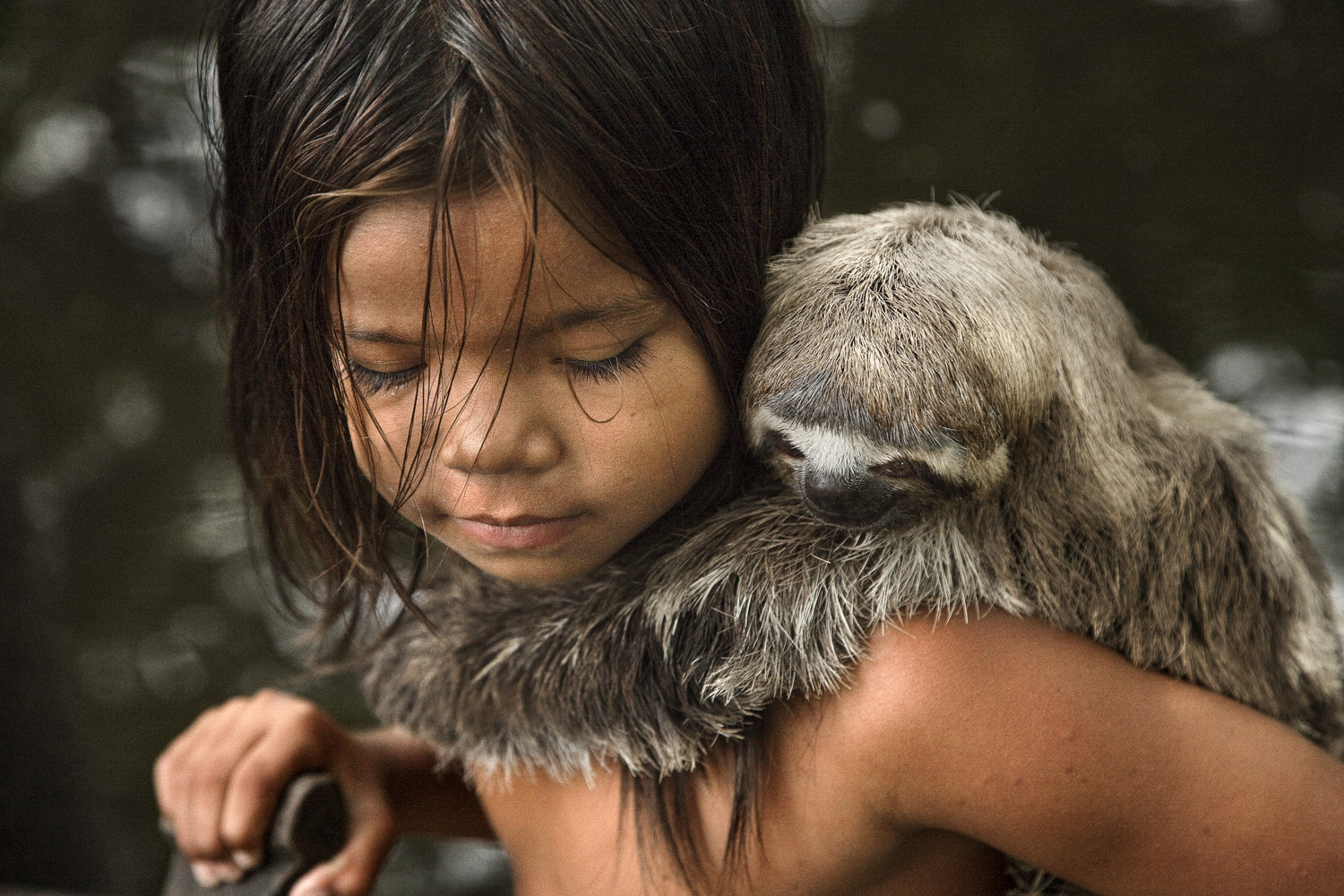 My photos are a song of love to nature and to the Brazilian people.
They spring from the villages, the countryside, the urban outskirts, the factory floors, the holds of ships.
The front and the back, the story at a glance.
On the one hand, this immense fertile Amazonian country, a true symphony of beauty.
On the other, the murderous rape of the ecological sanctuaries, the degradation of nature with impunity, the plundered, voiceless people.
I take photos for the archives of our memory, as Baudelaire said.
I am aware that my photos will soon be precious relics, evidence of what was lost.
It is necessary to document, because everything is quickly being destroyed.
Man has separated from nature and ignorantly thinks he can rule over and tame the vast biological complex according to his desires, even though it is he who is actually submitted to it, by higher laws.
I am a combative artist, untamed, a traveler and collector of worlds.
My photos invite for reflection, the spur imagination and kindle dreams.
I have no commitments to schools, parties or ideologies.
My photos are not a framework for anything.
They are like music, they celebrate life.
I am a traveling photographer, poet, teacher and interpreter of Brazil.
For precisely 50 years I have been walking through this blessed and fertile land, blazing trails across mountains, hills and valleys, scouring rivers and marshlands, documenting the tormented walk of this people.
Tirelessly, passionately.
It was in the Atlantic Forest, in the forests of Amazonia, in the drylands of the Cerrado and in the aridness of the Caatinga that I gave form to my model of the universe, to my creative matrix: fighting with photographs and words for a new ethics, a new planetary consciousness.
I see art as an agent of transformation, the result of a deep inner truth, of a commitment to the defense of life.
Today, when I travel two or three thousand kilometers along the edge of the forest, I see only a black wall of smoke, the smell of scorched earth, cattle grazing where majestic forests once stood, charcoal kilns swallowing wood, wildcat gold-mining bleeding the earth, soybean farms marching into Amazonia.
And even worse, I do not see any prosperity.
Amazonia, the planet’s last great reserve of plant life is succumbing to greedy gangs of landgrabbers, to farming companies responsible for the cutting of more than ten million cubic meters of wood per year.
Its importance finds no echo in the conscience of Brazilians.
They do not know that their country’s greatest wealth is this grand biological heritage, on which our healthy survival depends.
The destruction of the largest forest on Earth clearly reveals our neglect, our collusion with the revolting crime.
We are allowing the desertification of our civilization’s largest scientific laboratory, even before we have studied it enough to discover its secrets.
Scientists say that it could contain hundreds of compounds that could revolutionize health on Earth.
Amazonia is home to one-third of the Earth’s tropical forests and more than 20% of its 1.5 million plant and animal species.
It is the planet’s most biodiverse region, but its forests have been ruined without generating social and economic benefits.
Today, nearly 90% of the wood extracted from the forest is cut illegally, by clearcutting, without creating tax revenue or formal jobs.
This country is named after a tree but is nevertheless destroying them all, out of greed and desire for short-term advantage.
Every tree should be considered a moral heritage and a strategic asset of the country.
A staggering 99% of the Brazilian-pine forests are now gone; the same goes for 93% of the Atlantic Forest, 45% of the Cerrado and 17% of Amazonia.
With climate change and the current pace of deforestation, scientists predict that the great forest will be cut down within the next twenty years.
Time is short. Even within the next five years, the rampant destruction could unbalance the distribution of hydric resources throughout all of South America.
We are the holders of one of humankind’s most vital heritages, a space of crucial importance for the survival of humanity.
We should have already committed ourselves to recovering these forests starting more than two decades ago.
Scientists and scholars say that there is an urgent need for a national prohibition to halt the destruction, and for government to commit to implementing a new social and economic model for Amazonia’s 25 million inhabitants.
There is also an urgent need to deploy a scientific-technological revolution in Amazonia, with the training of technicians highly specialized in a wide range of scientific fields to occupy and study this fantastic laboratory.
And there is an equally important but more subtle need: a revolution in how the average Brazilian sees Amazonia, in what he or she really wants for Amazonia.
Amazonia must not be allowed to arrive at the tragic point of the Atlantic Forest, which is nearly inexistant now in the wide band it once covered along Brazil’s coast.
Time is running out. With the climate changes now underway, in at most five years, the destruction of Amazonia could affect the distribution of hydric resources throughout South America.
I have no doubt that the destiny of the largest tropical forest on the earth, now more than ever, depends on worldwide public opinion.
It is time to understand, above and beyond ideologies and parties, that only total engagement by the peoples of humankind can change the course of the looming disaster.
My photography is a shout for saving what can still be saved.
It pleads for outrage and a firm stand from here onward.